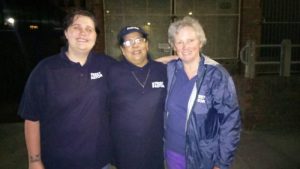 We went to the Winstanley Estates in Battersea as we did three months ago. It was a little busier than last time and we did not intent to spend very long there. We met a man selling jerk chicken outside Providence house who had a little program to engage local youth in cooking on a Friday evening. Wayne was upset as he loves jerk chicken and missed the sale as they were closing up as we arrived. Katy also expressed a love for jerk chicken, Cynthia and Felicity were not too concerned.

As we moved into the Winstanley estate area we met some people we had met on our last visit and engaged them in conversation. We covered a number of topics to do with local politics, local crime, Parenting, policing and public safety as well as personal issues to do with spirituality. It was great to hear these men talk about their concerns and again confirm that it was good to see us there. They signposted us to York Gardens a local place but in the end warned us not to go, we made tracks to that venue immediately.

In York Gardens we met a slightly younger group who were slower to engage with us but again shared their concerns on numerous subjects. One young lady shared a gospel track with us which she would listen to for comfort (Terry Garmon, Any way you bless me). It was great to share faith and local concerns with this young lady. These experiences showed us that there is a great concern for the area and we felt that is was important for us to step up to the challenge of being the church on the streets in this area.

As we moved into the Clapham Junction area we met a young man who was so moved with what we shared about our work that he reached into his pocket and gave us Twenty pounds. We do not go out with the objective of raising money but we received his gift with thanks and will put it to good use in our work.

As we moved along we saw that there was a great deal of broken beer bottles. As we began to clean up the mess a young man approached us and spoke of an ongoing problem which he sees from across the street of young men dinking their beer and smashing their empty bottles against the walls. We shared his concerns for public safety and assured him that if the chance arises to flag post this issue to the police that we will.

It was a great evening for us and we are keen to establish a work in this area. Battersea and Clapham have opened up to us and we hope to be ready to face the challenges.