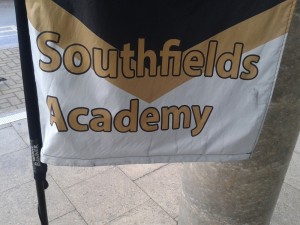 After conducting a successful patrol on a Wednesday afternoon outside of the Academy we have been invited to come into the establishment to begin a work as Schools Pastors.

This has been initiated by the Schools Deputy head Larry Davis who was brought into the school to help address the schools disciple problem and has sought ways to engage the school with the local community. The team have been privileged to work inside the school after some reserve when the work commenced in the summer of 2014 about the role they were expected to play but have found that the team has complemented the schools efforts to promote high ambition with the students.

The team have also been privileged to work alongside the older students of the school who are part of the schools anti-bullying club. We have been active in the school promoting a zero tolerance to bullying and have had input in revising the schools policy on bullying.

We also participate in the schools satellite programme where children who have been excluded from normal school activities for a short period are taken out of their lessons and we have a chance to talk to them one by one. This has enabled us to build strong one to one reationships and a good repore with many students. Although there have been some cases where we were unable to help there are many more where we have seen notable change.

Over the last three years our work has developed to be more involved in the Academy. The team are honoured guests at the Academies external funcions and many of the schools staff have given testimony of how the work of the team has changed the atmoshere of the Academy.