A “First” in Wantage & Grove

It happened – quite unexpectedly – and I think it’s a “first” in Wantage & Grove!

We’d just gone out on the streets – a team of three Street Pastors and two young men approached us and one said, “I don’t know if anyone else has ever done this before…”

My mind was racing at this point, “What on earth is he about to do?”!

“…but we just wanted to say thank you for all the lollies and the help you’ve given. So we brought lollies for you!”

The young men reached into their pockets and handed us two lollies! Wow! We were quite taken-aback! Lots of people thank us for the work we do, but I don’t think anyone gave us lollies before! So, a big ‘thank you’ to Lee and Adam! Top quality! :- ) 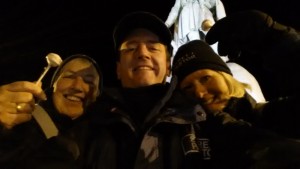