CAP of the Year Award

Wantage & Grove Street Pastors is a partner in the Wantage & Grove Community Alcohol Partnership (CAP), in which numerous organisations work together to help reduce under-age drinking and associated anti-social behaviour in Wantage & Grove. 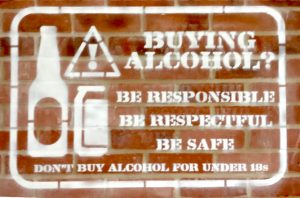 Over the last year the CAP has put in a lot of effort, particularly in educating young people about the dangers of alcohol use. We ran a competition at King Alfred’s Academy for pupils to design a new alcohol awareness stencil, which you may have seen popping up around Wantage and perhaps other parts of the UK. The stencils are sprayed on with chalk, can be washed off and are sprayed with the permission of the owner.

We also held an alcohol education theme day for Year 9 pupils with various activities and presentations dealing with topics such as proxy purchase, licensing, health effects, addiction, the law, etc. and ended with a presentation by Henry Mayberry a singer-songwriter who lost his elder brother to alcohol abuse.

As a result of our hard work and success we won three national awards, including CAP of the Year 2017. Our coordinator, Nigel Watt, who chairs the local CAP was delighted to attend the award ceremony in London and to collect the CAP of the Year Award on behalf of the whole team.

There were also articles in the following local media: