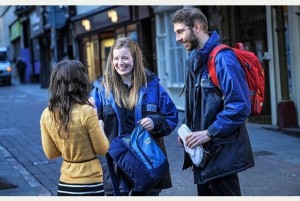 The Ebbw Vale Street Pastor initiative was launched on November 27th 2009 at the Civic Centre in Ebbw Vale. Following months of training, 16 Street Pastors were commissioned at a service held at Christ Church Ebbw Vale on Friday 11th of June 2010 and later that evening the first team patrolled the streets of our town centre

Our Prayer Support Team is a vital part of the evening, providing prayer for the Street Pastors and those that they meet during the evening. There are about 4 Prayer Pastors on a rota basis who meet at our base alternate Friday nights and about 15 who pray from their own homes.

We patrol our town centre every Friday evening from about 10pm until 2.30am or later as required. Also when we have enough resource we also patrol Saturday evenings when the Rugby Internationals are playing home games.

Our mission is to train volunteers drawn from Christian churches of different denominations to provide a listening ear and practical help to the socially marginalised and the needy. We typically patrol the streets of Ebbw Vale on Fridays and work in partnership with the Police, local council and a range of voluntary and statutory organisations in order to reach and help all those in need. The gospel is the reason for what we do but is not at the forefront of what we say. We are non-judgmental and will give time and help to anyone and everyone we meet. So we are there to care, to listen and to help.