It was in October 2008 that a number of us were invited to attend a meeting in Blackwood and listen to a presentation about the Street Pastor initiative. The invitation initially came from Gwent Police and we came away from that meeting very impressed and with a desire kindled in our hearts to commence a similar initiative in our own County Borough of Blaenau Gwent.

It has taken us a long time to get to where we are today but we are thrilled to be a part of the national and international initiative and to be the first in Blaenau Gwent to engage in our town centre together with Abertillery who we have jointly trained with.

On the 11th of June 2010 we were officially commissioned as a team at a special Commissioning service held at Christ Church in Ebbw Vale and blessed and commissioned by Rev Dominic Walker – the then Bishop of Monmouth. In his address he likened our work to the story of the “Good Samaritan” and at the close of the service presented to us our Street Pastor caps. Following the service our team hit the town centre and we had a favourable response from the night time revellers.

We are hoping and praying that the towns of Tredegar and Brynmawr will come on board in the future with Street Pastors being trained from their own local churches. 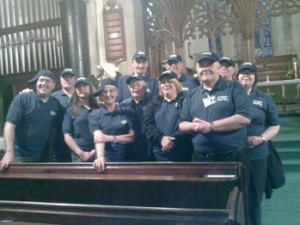