In a world where people look the other way, cross the road, and don’t get involved Street Pastors do the opposite. We look for people and situations, we try and spot vulnerability, we see the struggle and step in or alongside in some way. 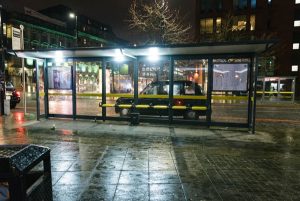 She was an alcoholic and drunk, well known by the taxi drivers so no-one would take her. She had no money and had previously been assaulted so was afraid to get help, but she gave us a friend’s number. We phoned and the friend put money into her bank account and asked us if we could take her to the cash point. We convinced a taxi driver to take her, gave the friend’s number to the driver (because the address wasn’t showing up on the satnav) who gave him directions and off they went.  We received a text to let us know she’d arrived home safe and we made contact the next day to see if she was OK. She’d lost her phone in the taxi but he was able to track it down and get it back from the driver. The taxi drivers really assisted us with this.