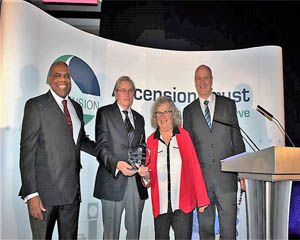 February 2016 – Ascension Trust contacted all Street Pastor groups, asking amongst other things, who were our longest serving Prayer Pastors? We replied saying that Val Hart, Mike Soanes and Richard Simpson had been continuously supporting us since our first ever patrol on 23rd May 2008. We were then delighted to find that from all the responses received, they are in fact the longest serving Prayer Pastors in the UK !

This resulted in their being invited to Ascension Trust’s celebration dinner in London, which Val and Mike attended; there they received an award for their services to the ministry, as pictured above, with Val taking the opportunity on stage to tell Les Isaac, CEO of Ascension Trust, that It’s a load of rubbish being given an award for praying !

The importance of all our Prayer Pastors cannot be over-emphasised and, in this context, we would also like to thank and acknowledge: