Dan Whiteway from Basingstoke Gazette joined us for an evening

Basingstoke Gazette on 2 May

IN LIFE, we always need someone there for us to pick us up when we fall. 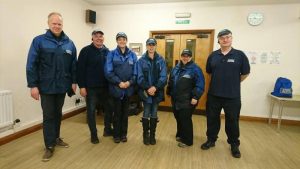 For Basingstoke Street Pastors, this truism can be seen in both a literal and figurative light.

The literal is fairly obvious, with those on nights out in the centre of Basingstoke who are a little bit worse for wear being helped along to safety.

But the figurative interpretation of picking someone up when they fall is a thought that emerged when I spent a Saturday night with a team from Basingstoke Street Pastors over the weekend.

“Every person has a story” volunteer co-ordinator Malcolm Murray told me, outlining that the reason someone may find themselves incapacitated by alcohol or drugs may be attributable to a deeper cause – a recent tragedy, mental health issues, job-related anger, or simple despair at how one’s life currently is, perhaps.

Street Pastors asking people just three simple words – ‘Are you OK?’ – might lead to a conversation that opens a path to resolving these deeper-rooted, emotional problems.

The volunteer Street Pastors – of which there are 40 or so, made up of parishioners of Basingstoke churches – might not see the results of these conversations, but the positive impact they make was evident.

Speaking to doorstaff at venues across the Top of The Town, the Street Pastors were credited as playing a key role in making going out in Basingstoke a safer experience, providing a service that would otherwise likely fall to the emergency services to have to deal with.

One story told to me by volunteer Nicki was almost accidentally coming across a visibly distressed girl who had fallen asleep on a train which terminated in Basingstoke and was left with no means of getting home. The Street Pastors gave her support to get home.

Nicki said: “If we were not there, who knows what would have happened to her?”

The neutrality the volunteers provide – as opposed to emergency services or doorstaff who may fall victim to an aggressive mistrust of authority figures, exacerbated by alcohol – is a key aspect in how they can help diffuse situations, with it evident on Saturday night, the volunteers were well-recognised by revellers.

The volunteers are trained in a number of areas, ranging from first aid and recognising levels of inebriation, to situation management.

Malcolm added: “Dealing with an aggressive person the first time, you are nervous. But you get used to it, your confidence grows as your experience grows. But there are always times when you have to just step away.

“I remember someone shouting at me and then 10 minutes later they were crying on my shoulder. And we had someone come up to us and apologise a week after they had been verbally abusive to us.

“We don’t take it personally.”

Given being the sober one in a group of drunk people often is tiresome, I asked the team why they spend one or two Friday or Saturday nights a month looking after complete strangers who may be actively hostile towards them.

Two inter-linked answers revolved around a ‘do unto others as they would do unto you’ theme – one was going out drinking a decade ago and seeing people in need of help, while another volunteer had a feeling that if her children were out on the town she would want to know someone was around to look after them.

But the overarching reason came down to putting into action their Christian faith – helping others and playing a role in the community.

My own personal experience on Saturday came on a ‘quiet night’ – in between two Bank Holiday weekends seemed to be the general reasoning – but the team I was with still reunited a woman with friends she had lost, safely got an inebriated woman to a taxi, aided police and doorstaff with ‘eyes on the ground’ backing for a potential crime, and gave out the now-recognisable essentials of water, flip flops and lollipops.

The second team did similar work, but also helped a homeless person who needed hospital treatment.

What struck me most was the relentless cheerfulness, selflessness and dedication of the volunteers to keep giving so much of themselves to the role, in which both the negative and positive sides of urban humanity are encountered so regularly.

For more information about Basingstoke Street Pastors, go to streetpastors.org/locations/basingstoke.