The Purple Flag accreditation, run by the Association of Town Centre Management, aims to raise the standard and broaden the appeal of town centres throughout the UK as evening or late night venues to support local economies.

Basingstoke’s Purple Flag celebrates the town’s diverse number of venues for different ages, groups, lifestyles and cultures, its crime reduction and prevention measures and the ease and availability of night-time transport links.

Chief Executive of Basingstoke Together, Lucy Boazman, said: “We are so pleased that Basingstoke has once again held onto its Purple Flag accreditation.

“A huge number of organisations and authorities work so hard to keep the town friendly, fun and safe for people from all walks of life in Basingstoke. So, this accreditation shows that we are successful in doing so. However, we will not rest on our laurels. We will keep striving to ensure that Basingstoke is a great place to spend your free time whether it’s shopping during the day or enjoying a meal, a theatre show or a glass of wine in an evening at a one-of-a-kind bar or restaurant – all of which we’re lucky to have on our doorstep.”

The Purple Flag committee praised the range of events on offer in Basingstoke throughout the year, including Basingstoke Festival, the Exit 6 Film Festival and Independent Business Month. Also mentioned were popular independent ventures, including the Duck and Tipple and the Escape Rooms, with their ability to cater to a wide age range.

The town has had the accreditation since 2013, and is one of the 70 towns in the UK to have the Purple Flag. 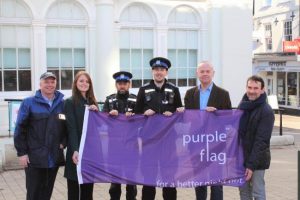