We had a fantastic Pub Quiz in the White Lion of Mortimer in Mitcham last night.

We were joined by 8 teams comprising 38 people who battled it out over 5 rounds of questions covering London Landmark Anagrams, Who Lives at this address, Double Trouble, Fruity Quiz and British Films. 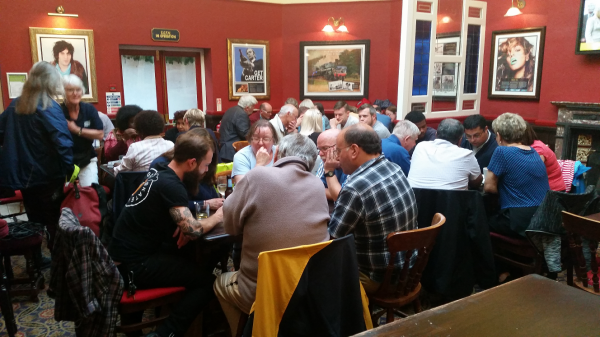 The teams working hard on the London Landmark Anagrams!

The top three team were separated by only a point with a tie for second on 45 points but a clear winner was the “Dazed and Confused” team on 46 points so it appears they were anything but dazed and confused!

The winning team receiving their prize from the Duty Manager.

We also launched a raffle during the quiz and overall last night we raised £223 for Merton Street Pastors.

You can still buy raffle tickets from the pub between now and the big raffle prize draw which will be made when the Street Pastor team stops in there on Friday 29th July between 10pm and 1030pm.

We just want to say a huge thank you to Carol and her team at the White Lion of Mortimer who have been a great support in general to Merton Street Pastors and particularly for this event. We look forward to the next one!